Undertaker spirits is a new beverage brand looking to appeal to monster movie/ comic book fans. The design solution is packaging that reflects the aesthetic interests, as well as a mobile app with a brand story that tells ghost stories, shares party/event photos. This will establish an overall spooky appeal, that attracts the target audience. The packaging will have an undead hand built into the bottle stopper and a laboratory glass bottle that resembles that which would be found in a mad scientist’s lab space. The flagship beverage is called Reanimator’s Elixir.  The background story for Reanimator's Elixir is printed on the packaging.
Found at the bottom of a morgue fridge is the glow of a secret formula.  A formula that will take a lifeless husk of a gathering and restore it to full tilt blowout party.  Flavoured with citrus, mint and ginger, Reanimator’s Elixir has a bold taste, that will take you by surprise, like survivors facing down a zombie horde, boredom doesn’t stand a chance. 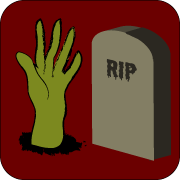 Sustain Skateboards
↑Back to Top